Here is another blog entry on a non-Mirage TMNT comic book driven by reader interest in the comic. This time the publisher is Lightning Comics, the year is 1996, and the comic is Creed / Teenage Mutant Ninja Turtles #1.

Unlike the other comics featured in this blog which are rarities and misprints that occurred “naturally,” there are a number of “artificially rare” variants of Creed / TMNT #1. I say “artificially” because the publisher decided to limit the print run. They published 2000 Platinum copies, 1200 Gold copies, 700 Signed and Numbered copies, and 500 Subscriber Exclusive Blue/Bronze copies. I’ll touch upon all of these, but this last one limited to 500 is the specific comic readers of this blog have been most interested in, and the one that will be the focus of this blog entry.

Interestingly, MyComicShop has no image for the Blue/Bronze Subscriber Edition, which might be an indication they’ve never actually had one in stock. As of this date, 22 of their customers want one, 4 having added the variant to their want list in the last six months. This is an indication of the strong collector interest in this variant (and the low supply of available copies)

The intentional rarity aspect is an important distinction worthy of discussion: Lightning Comics set the rarity when these variants were produced, and they included a Certificate of Authenticity (COA) with each copy, specifically spelling out the number of copies produced. For example, below is the COA that Lightning included with the Blue/Bronze subscriber edition:

This is the Blue/Bronze Subscriber Edition Certificate of Authenticity (COA), indicating the 500 copy print run.

A collector seeing this originally with the book, was immediately educated on the fact that they held a rare variant in their hands, in the case of the subscriber edition, a variant limited to just 500 copies. Lets consider the contrast here, to the NYCC variant of TMNT #3, which has the same 500 number of copies originally produced. Eastman and Laird printed off 500 advance copies of TMNT #3 to bring with them to the 1985 New York Comic Con. But collectors would not learn until later when the rest of the print run was produced, that these 500 advance copies had a slight coloration difference on the cover, making them discernible from the remainder of the print run. Everything else about the two versions was identical, and the color scheme on the variant cover is so similar that if you haven’t learned about it, you might not even notice. This slight coloration difference was unintentional. Had the rest of the print run ended up looking exactly the same, those advance 500 copies would just be a nice souvenir comic con attendees took home. And when they got home from the con originally, that’s probably how people thought about the comic back in 1985. But by contrast, anyone handed a copy of the limited print run variants of Creed / TMNT #1 saw right away that this was a limited print run collectible, different from the other copies. In fact, many of the copies you’ll find out there are still sealed in the original polybag, literally untouched. To my way of thinking, there are two completely different dynamics at play here: in one scenario the rare collectible arose out of a “natural” occurrence, one that was unintentional and wasn’t predicted in advance, making it unknown and unknowable to original collectors, while in the other scenario the manufacturer decided in advance to produce a rare collectible by controlling the print run, and collectors knew all the facts immediately.

Does this “artificial” creation of a rare comic book impact how collectors should approach it? Lets go through the different variants and think through some of the considerations. First, we’ll consider the variant that is the main subject of this blog entry: the subscriber-only edition with the Blue/Bronze cover, limited to 500 copies printed. I think the “subscriber-only” aspect creates some added appeal to this variant, i.e. you had to be a Lightning Comics subscriber to get one. So in effect, there were two limiting factors to collecting this variant of the book, one being the print run of 500 copies (the lowest of the various variants of the book created), and the second being that you had to be a Lightning Comics subscriber to get one. Collectors are always going to prefer to rarest version of a given comic, so if offered the choice between Blue/Bronze, Signed/Numbered, Gold, and Platinum, most would choose the Blue/Bronze because that version is the most scarce. But the second limitation of having to be a subscriber meant that even if collectors wanted one, most could not get one simply because it was not available to non-subscribers.

As of this writing, the CGC census shows a total of 3 copies of the Blue/Bronze Subscriber Edition have been graded.

I have to imagine the vast majority of each of the 500 Blue/Bronze copies are still bagged and boarded in a box somewhere, carefully stored away by each of the collectors who received them originally. At the time of this writing, only three copies have ever been turned in to CGC for grading (as shown above). The CGC census information leads me to present another consideration about the various variants of this issue: physical manufacturing difference. With the Blue/Bronze edition (and also the Platinum and the Gold editions), the cover has a unique coloration that allows it to be told apart from the others. CGC can therefore track them independently on the census as variants. But what about the Signed and Numbered edition of 700? 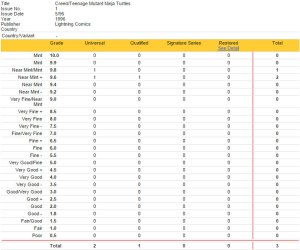 The CGC census result for Creed / TMNT #1 (1996) shows a “Qualified” copy of the “regular” (direct edition) version. I suspect this copy is a member of the 700 Signed/Numbered edition.

These 700 have no physical manufacturing difference to the rest of the “direct market exclusive” edition copies. CGC does not accept COA’s with submissions. So from CGC’s perspective, a member of this group of 700 sent in for grading would just be a “regular” copy with a name written on the cover (any signature they did not witness themselves is treated as words written by “somebody”). That would be expected to be treated by CGC as a “Qualified” grade which essentially translates to: “this book would be in the stated grade except that somebody wrote a name on the cover.” The 700 special copies Trent Kaniuga signed in 1996 do not have a number written on the cover to match up with the COA, although they do have the year (’96) written below his name. A Qualified copy appears on the census grouped with the other “regular” direct edition copies, which I expect is very likely a member of the 700. To a collector, is such a “Qualified” copy any more or less desirable than, say, a CGC Signature Series copy of the same direct market edition, signed by Trent at a comic con in a later year? Especially after Trent Kaniuga tweeted that 2014 may have been his last comic con? Each collector may have their own answer to this question, but the fact that we are asking it illustrates the consideration that a physical manufacturing difference introduces to the question of rarity.

In 2014, a Tweet from Trent Kaniuga suggested that year’s Long Beach Comic Con may end up being his last :-(. (Hopefully that won’t be the case!)

Finally, there are the Platinum and Gold editions. At print runs of 2000 and 1200 these seem relatively rare in relation to some of the other comics I have featured in this blog. For example, the TMNT Color Special #1 misprint had a print run of 1000, and for the TMNT #4 misprint all but 1000 copies were reportedly pulped. But going back to my earlier point, the print run rarity of the Platinum and Gold editions by contrast is “artificial” because the manufacturer decided in advance to produce a rare collectible, and to make sure nobody missed that fact, they also printed matching COA’s to immediately educate collectors about the print run rarity. So, we have to assume that the vast majority of those collectors who originally received these variants, still have them stored away carefully in a box somewhere, likely still in their original polybags. This is in stark contrast to comics with rarity that is “unintentional” in nature and not known to collectors in advance. Knowing what the original collector was thinking when they acquired their copy originally is a key piece of the rarity (and desirability) puzzle: if at the time of their purchase collectors didn’t know they just took home a rare variant or misprint, their behavior when reading, keeping, and storing the comic is going to be much different. And this difference leads to a greater difficulty for collectors in later years to find a high grade copy.

My own conclusions: I can see why readers are interested in the Blue/Bronze “subscriber-only” edition limited to 500; of the various Creed / TMNT variants that’s the one I’d be most interested in as a collector. But I see no reason to seek out the Signed/Numbered edition or the Gold or the Platinum copies. If the Blue/Bronze variant didn’t exist, then the Gold variant might interest me (as the second most rare), and if neither the Blue/Bronze nor Gold variants existed then the Platinum might interest me. But given the full spectrum of available variants of this book, the most desirable is arguably the Blue/Bronze Subscriber edition because it is the only one that combines these attributes: (1) Physical manufacturing difference (cover has unique blue/bronze color scheme) making it discernible from the other versions printed, (2) Only Lightning Comics subscribers were able to get their hands on one originally, and (3) The print run is a nice low number, at 500 copies. Although there is no way I could ever see the Blue/Bronze variant rising to the level of desirability of those 500 TMNT #3’s from the 1985 NYCC, I can absolutely see why readers are interested in it, and my own interest was piqued enough to make this blog entry — I hope you have enjoyed reading it :-)!

p.s.  On the topic of “naturally rare” versus “artificially rare” variants, one of the most important pieces of information collectors of modern comic books should know, is that most publishers fed comics into two distinct distribution channels, (1) direct edition comics sold directly to comic shops on a non-returnable basis, and (2) newsstand sales where unsold comics could be returned for a refund.  The comics sent to newsstands were part of their own print run and distinguishable from their direct sold counterparts (they had to be distinguishable in order to know which copies were eligible for a refund and which were not).  What is particularly key for collectors to know, is that the distribution ratio (percentage direct sold versus percentage newsstand) has created some wonderful “natural” variants out there, some with astonishingly low print runs.  If this sounds fascinating, here are a few links to blog posts I have made on the topic: Comic Book Newsstand Editions: Understanding The Difference; Spawn Batman Newsstand Edition; Spawn / The Savage Dragon #1.  Also, in addition to newsstand editions, see more “themes” for other Rare Comics To Look For.